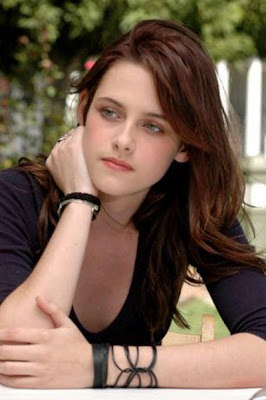 If you have a teen or tween daughter and/or a wife (I have both), you’re probably familiar with the Twilight book series by Stephanie Meyer and the recent movie Twilight. It’s a dark, teen romance-type movie centering on Bella (played by Kristen Stewart, pictured) and a teen boy who turns out to be a noble…vampire.
The book and movie depict a nice, loving bond between Bella and Charlie, her noncustodial father. Charlie is the sheriff of Forks, a small town on the Washington state coast. When Bella was very little, her mother divorced Charlie and moved to Phoenix, declaring she didn’t want to get stuck in the small town rut that she thought Charlie was in. Since the mother left with Bella, Charlie had Bella with him when he could, which wasn’t very often. The movie begins when Bella is 17. Charlie, a strong, silent type, mourned the relationship with Bella’s mother and never remarried. When Bella’s mom moves away with her boyfriend, Bella decides to go to live with her dad. I originally wrote about Twilight, the movie, in A Loving Bond Between Divorced Dad, Daughter in ‘Twilight’ (Part I). Below, Sonja Newcombe, a reader, traces the father-daughter relationship through the four books in the series. Warning: spoilers ahead. (On the other hand, it does help dads like myself who haven’t read the books to have some idea what happens later in the story.) Bella & Charlie in the Twilight Series By Sonja Newcombe Bella”s relationship with her father in the novels is deeper than shown in the movie, and grows throughout the series. Bella and Charlie share a special relationship which is not necessarily uncommon between fathers and their daughters. As they are both quiet and unassuming people, most of their love for each other is played out in their actions rather than words. For Bella, it”s mostly that whenever danger is about (usually after Bella), she thinks of the threat to her father first. Twilight has a perfect example, which is shown in the movie. When James starts tracking Bella, Edward gets her into Emmett”s Jeep and drives off. Bella insists that they find some way to protect Charlie before they leave Forks entirely.

For Charlie, it”s shown through the small things. As seen in the film version of Twilight, Charlie buys Bella a welcome-home present – a 1953 Chevy truck. During the book, instead of changing her tires for her as shown in the movie, he instead puts snow chains on it before leaving for work. She only realizes after she arrives at school that day.

My throat suddenly felt tight. I wasn”t used to being taken care of, and Charlie”s unspoken concern caught me by surprise.

During New Moon (book 2), the Cullen”s leave unexpectedly and Bella becomes lifeless and simply walks through the steps of her life. This takes its toll on Charlie, and he later opens up to Alice about it, saying “…I wonder if I”ve ever grasped how much pain she”s really in. It”s not normal, Alice, and it… it frightens me. Not normal at all. Not like someone… left her, but like someone died.’ During Eclipse (book 3), Bella graduates from Forks High School. Charlie is the typical parent – proud of his daughter. But he also feels guilty for what he perceives as not looking after her like he should. Bella makes her feelings on the matter quite clear.

“You do a fantastic job. World”s best dad. […]And I”m really glad I came to live with you, Dad. It was the best idea I ever had.’

And during Breaking Dawn (book 4), Charlie gets to see his daughter married. Knowing how much Bella”s mother is against marrying young, he insists that Bella has to tell her mother. His ploy fails, and while he didn”t want his daughter married young, he still supports her decision. After the ceremony, when Edward and Bella are due to fly out on their honeymoon, they find him to say goodbye. This is one of very few times they actually say how they feel.

It was hard to talk about love with Charlie – we were so much alike, always reverting to trivial things to avoid embarrassing emotional displays. But this was no time for being self-conscious. “I love you forever, Dad,’ I told him. “Don”t forget that.’ “You, too, Bells. Always have, always will.’