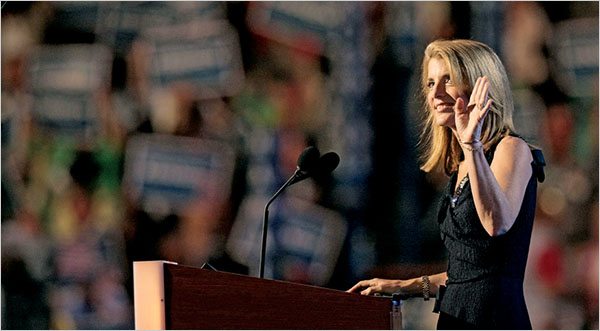 Albany, NY–In the New York Times Sunday Magazine of January 4, Lisa Belkin has a piece that leads common folk like me to ask the question, “what does it take to get the Gray Lady to publish something you’ve written?”  Based on Belkin’s piece it certainly doesn’t take logic, good sense or a basic understanding of economics.

The piece, entitled “The Senator Track,” takes off from Caroline Kennedy’s inside track to Hillary Clinton’s old job as Junior Senator from New York to opine on what constitutes job experience.

Kennedy, as you already know, has essentially none, at least for the job of U.S. senator.  She’s never been elected to public office.  She has a law degree that she’s basically never used, done a lot of worthy volunteer work and helped to raise her children.  And then there’s that other job qualification – the votes of a majority of New York voters – which she also doesn’t have.  If she were anyone but a Kennedy she’d never be considered.

But Belkin isn’t much plumping for Kennedy.  She just wants to explain to us that we, and presumably employers, need to change what we mean by the word “experience.”  When it comes to hiring women who have taken, say, 20 years off to raise a family and now want to get a job, we’re supposed to count whatever they did during those 20 years as experience that’s in some way relevant to the job.

I say “in some way” because predictably, Belkin doesn’t explain how doing volunteer work should count as a qualification for being a plumber, waitress, architect, etc.  And what she also doesn’t explain is why an employee who’s worked for a particular company for those same 20 years doesn’t have more “experience” with that company than someone who’s worked for no one.

And what Belkin yet again doesn’t explain is why, if employers were to agree with her and treat raising kids and doing volunteer work equally with working on the job, anyone would choose to do the latter.  Why not just opt into- and out of- the workforce whenever you wanted?

There’s a simple explanation for all of Belkin’s nonsense.  She wants women treated differently from men.  Her piece is all about “women re-entering the workplace” after raising children.  Belkin doesn’t know much, but I’ll wager she knows that the vast majority of people on “the mommy track” are, well, mommies, while the vast majority of those remaining in the workforce and gaining seniority are men.

Fortunately, no one over the age of 12 and outside of academia takes this stuff seriously.  In a time when U.S. workers are fighting tooth and nail with Chinese and Indian workers, the idea that, when it comes to qualifying for a job, any experience is as good as any other is just plain nonsense.

So how did this piece get in the Times?  Maybe the editors got hired using Belkin’s ideas about “experience.”