Recently I read Anna Politkovskaya’s Putin’s Russia, in which the Moscow Nord-Ost hostage crisis/massacre is discussed in great detail. According to Wikipedia:

In October 2002 Chechen terrorists took the audience hostage in the Moscow theater that was showing the production of Nord-Ost, threatening to blow up the building and demanding withdrawal of Russian troops from Chechnya. Most of the hostages were released after the theater was stormed by special forces. 130 hostages were killed.

Politkovskaya (pictured), a Russian journalist and human rights activist who was murdered in 2006, criticized the Putin regime’s heavy-handed tactics during the crisis. In Putin’s Russia, Politkovskaya discussed Timur Khaziev, a young father who was killed in Nord-Ost. She writes:

Tanya, Timur”s young widow; and the eighty-seven-year-old grandmother cannot control their grief. Timur”s three-year-old daughter, fair haired Sonechka, ricochets around the grown-ups. Her daddy was not there to celebrate her third birthday because it came after Nord-Ost. 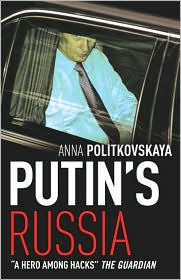 They set the table, and Sonechka climbs up on the chair. She takes the biggest cup. “This is for daddy. It”s daddy”s cup. You mustn”t use it!’ she warns in tones that brook no contradiction. Grandmother Roza has explained to her daddy is in heaven now, just like Roza”s own daddy, and he can”t come back anymore. But the small girl cannot see why he can”t come back when she, his beloved Sonechka, so much wants him to… Timur [had] combined his studies at the Gnesins Academy with playing in wind and symphony orchestras of the Ministry of Defense. He toured Norway with a military orchestra… “There, I had his uniform all ready, and his morning dress for concerts,’ Roza says firmly, in order not to be overcome by emotion as she opens the cupboard. “They just won”t come and take it back, the Ministry of Defense.’ Sonechka, whizzing past us, promptly grabs the cap with its shiny rosette, plonks it on her head and gallops around the room: “Daddy”s hat! Daddy”s hat!’ Tanya breaks down and leaves the room.

Tanya (aka Tatiana), his widow, writes about the special bond Timur shared with his little daughter on a memorial site:

Then Sonya (aka Sonechka) was born…What a love they had together! I loved this love, I loved that they loved each other so. I cultivated their love in this family…now she feels the loss…She grasps at me, like a drowning man does a straw: “Mama, don”t leave, stay here…’