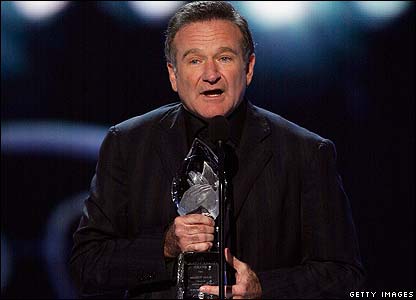 “Ah, yes, divorce … from the Latin word meaning ‘to rip out a man’s genitals through his wallet.”–Robin Williams

Robin Williams had one divorce, but I don’t know to what degree it shaped his thinking on the issue. It’s interesting though, that a couple of the characters Williams has played in movies are divorced men who were very hurt by the experience.

He plays Tom Dobbs, a comedian-turned-presidential candidate, in Man of the Year, and Dobbs speaks of his divorce in hurt tones, as if he had been greatly criticized or vilified by his ex.

Of greater significance is Williams’ role in Mrs. Doubtfire, where, cut out of his beloved children’s lives by his ex-wife after their divorce, he poses as an elderly Scottish woman to get a job as a nanny for his own children. Wikipedia’ s write-up of the plot can be found here.

Thanks to Michael Robinson of the California Alliance for Families and Children for the quote.