History was made yesterday.The National Parents Organization helped make it.Kentucky became the first political entity inthe history of the English-speaking world to establish a legal presumption ofequal parenting post-divorce.From nowon, all parents who divorce in the state will know that, absent unfitness, ahistory of abuse or domestic violence, they are entitled to equal parentingtime with their children.

Let me say it again:this is a first.It is a landmarkin the hard-fought history of family court reform.Ten years from now, 50 years from now, 100years from now, people will look back on April 26th as the day that turned thetide toward children’s well-being, greater equality, a less acrimonious legalsystem and a healthier society. 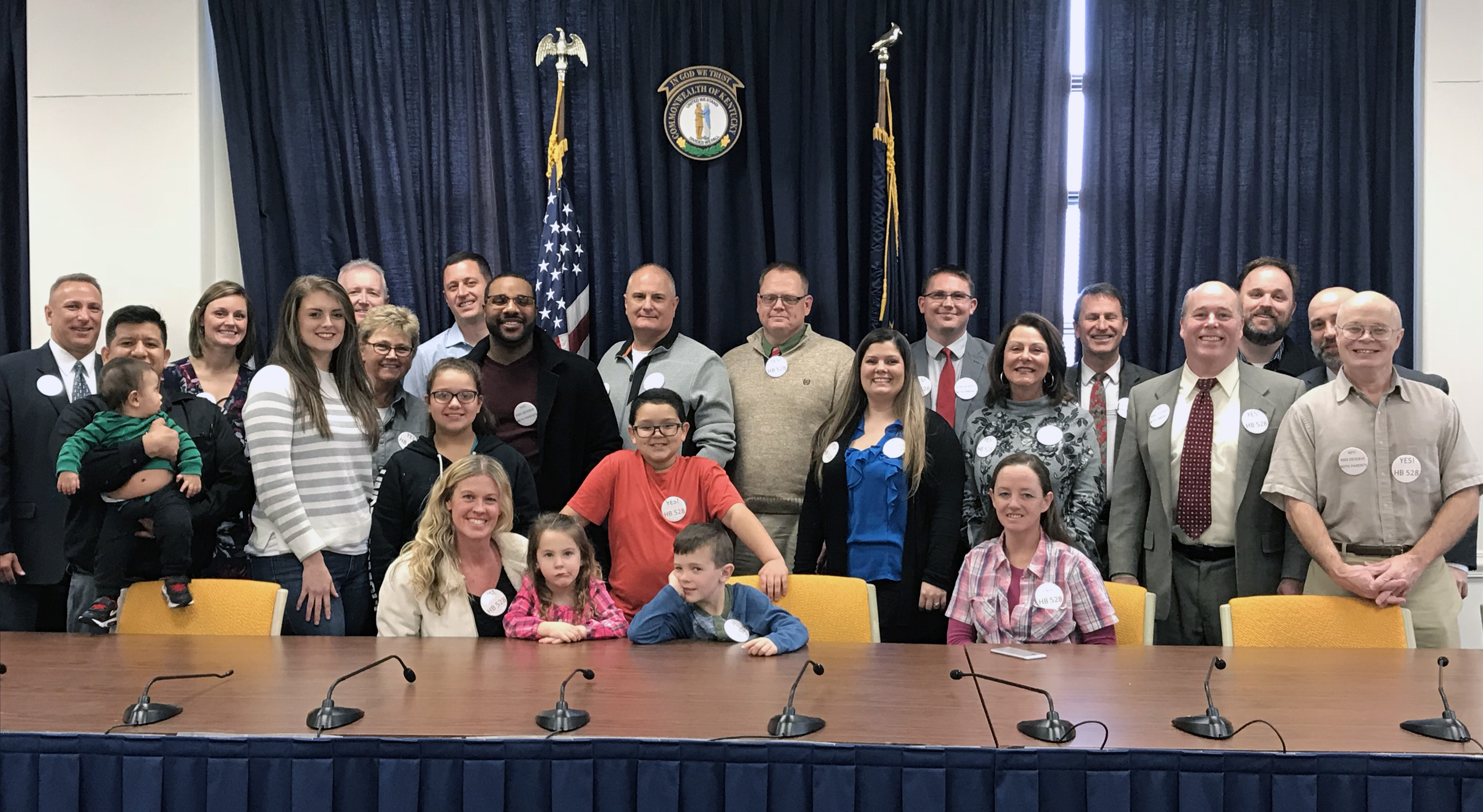 And the National Parents Organization led the way.Its Board member Matt Hale and numerousvolunteers (pictured) – nicknamed the Kentucky Heroes – worked tirelessly,intelligently and strategically to win passage of HB 528.Hale’s the same one who last year engineeredpassage of the law that established a presumption of equal custody in temporaryorders.From there it was a short hop toequal parenting in permanent orders.Toget an idea of Hale’s effectiveness, HB 528 passed by counts of 81 – 2 in theHouse and 38 – 0 in the Senate.Yesterday,Governor Matt Bevin signed the bill into law.

But that couldn’t have happened without the staunch supportof Representative Jason Petrie in the House.He not only supported the bill, he was instrumental in drafting it.He was the bill’s chief sponsor and testifiedon its behalf in the Senate.Kudos toRep. Petrie.

As if to underline how one-sided the child custodyconversation in favor of shared parenting has become, the usual opponentsfailed even to make an appearance.TheFamily Law Section of the Kentucky Bar Association took no position on HB 528and presented no witnesses at committee hearings.

Shared parenting is a raresituation in which common sense matches empirical research in a context wherepeople from the entire range of political ideologies can agree.Havingboth parents involved in the lives of children following a separation benefitseverybody involved, especially the children.A wide body of empiricalresearch shows that full involvement by both parents following a separation isassociated with substantially better child development outcomes, includingacademic performance, emotional health, drug use, and delinquency.Sharedparenting is a win for children, separated parents, and our communities.

Just so.And when “commonsense matches empirical research,” as it does with shared parenting, the pathforward is clear.When everyone –children, parents and society generally – benefits, public policy becomes easyto decide.Shared parenting is thatsimplest and most obvious of ways in which, at no cost to taxpayers, we candramatically improve the lives of parents and children alike.

Starting today, with Kentucky as our laboratory, we will beable to prove the naysayers wrong yet again.They routinely argue that shared parenting is unworkable, that it willexpose children to abuse, that it will increase conflict between parents,etc.Those claims have been debunked byscience, but now we’ll be able to accumulate data on the lived experiences ofparents and children in shared care.Those data will prove unfounded the doomsday claims of the narrowspecial interests opposed to shared parenting.That in turn will demonstrate to other states the wisdom of allowingchildren to maintain real relationships with both parents when the adults gotheir separate ways.

Today is a great day.It should be remembered for all times as the day on which one state toldthe world that what is actually in children’s interests must reign in familycourts.Every year, its anniversaryshould be commemorated as Shared Parenting Day.And the National Parents Organization made it happen.