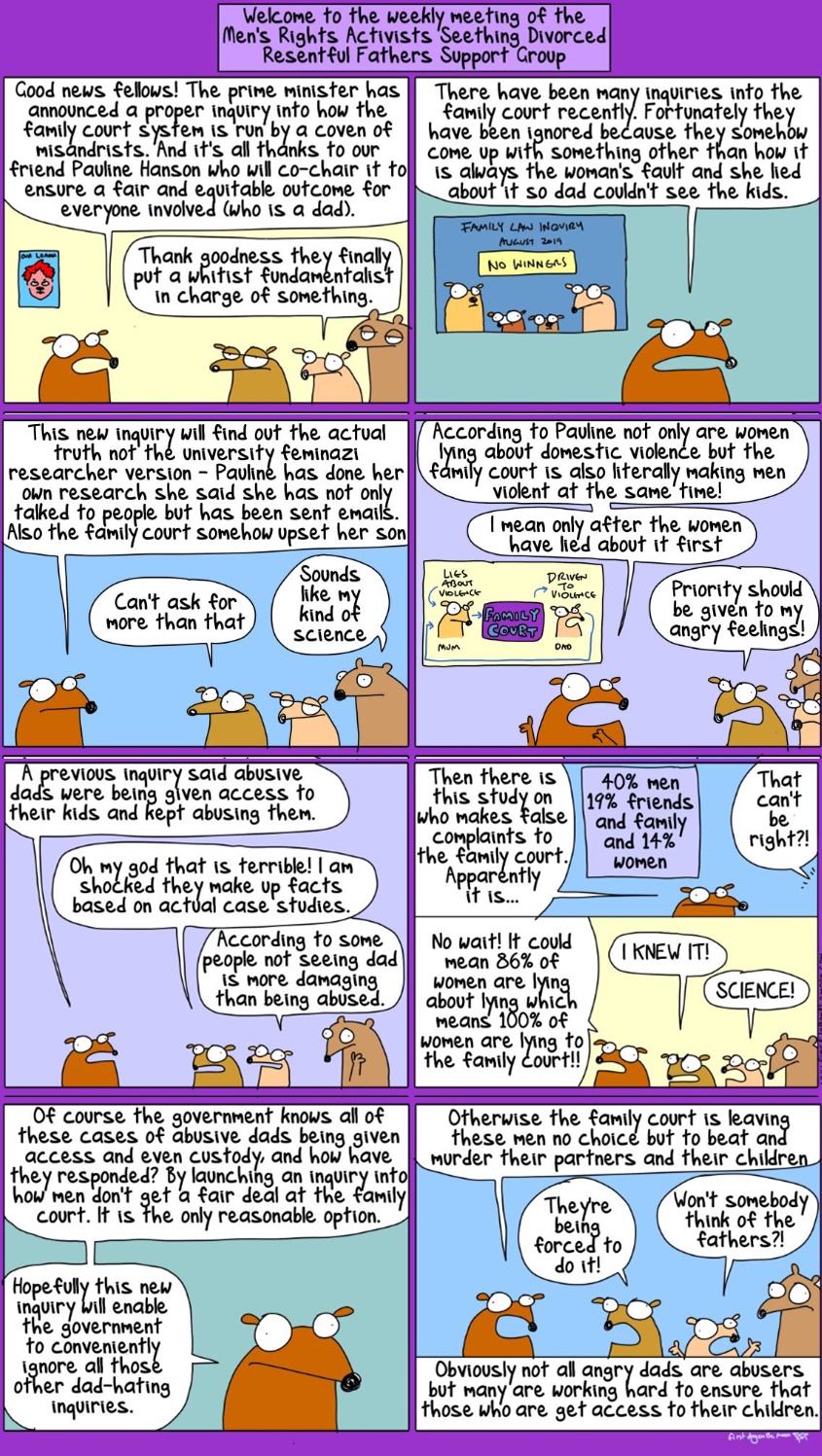 October 16, 2019 by Robert Franklin, JD, Member, National Board of Directors
In case Jess Hill’s article in The Guardian wasn’t clear enough, this cartoon should make the matter abundantly so (The Guardian, 10/4/19).  It’s an eight-panel piece by Andrew Marlton, a.k.a. First Dog on the Moon.  Now, didactic work is almost never humorous, but I suspect Marlton’s goal was less comedy than to display his ignorance of the subject his piece is about, i.e. the new review of family law in Australia.  If so, he’s done an admirable job.  Some may regard his astonishing misandry as a detriment, but clearly The Guardian does not.
So for example we learn that those who seek equality in family courts are really either child abusers, wife abusers or enablers of those who are.  Quoth the First Dog:
Obviously not all angry dads are abusers, but many are working hard to ensure that those who are get access to their children.
Oh, is that what I’ve been doing all these years?  Who knew?  The reality of course is the opposite of what Marlton claims.  In all my years of advocating for family court reform, I’ve met countless men and women who are fighting the same fight.  Not one has ever excused abuse or promoted parental rights at the cost of endangering children.  You’d think that, if that were the core of the family court reform movement, I’d have run into not just one or two such people, but scads of them.  I haven’t because that’s not what this movement is about.  Marlton’s either lying or inexcusably ignorant.
Marlton is too in thrall to his own ideology to know it, but the truth is that bills to equalize parental rights invariably contain an “out” clause for child abuse and domestic violence.  And under existing law, judges are required to consider claims of abuse when ordering custody and parenting time.  Those are the facts, but the anti-equality crowd’s got its story and it’s stickin’ to it.  That story was adequately told by Jess Hill and Marlton repeats it: men are violent and a danger to kids; women aren’t.
Of course, if Australia’s anything like the U.S., mothers pose a greater danger to children than do fathers.  The Administration for Children and Families has reported that for many years.  As to domestic violence, the Centers for Disease Control has for many years reported that women are over twice as likely to initiate DV as are men (Psychiatric News, 8/3/2007).
“Regarding perpetration of violence, more women than men (25 percent versus 11 percent) were responsible. In fact, 71 percent of the instigators in nonreciprocal partner violence were women. This finding surprised Whitaker and his colleagues, they admitted in their study report…. As for physical injury due to intimate partner violence, it was more likely to occur when the violence was reciprocal than nonreciprocal. And while injury was more likely when violence was perpetrated by men, in relationships with reciprocal violence it was the men who were injured more often (25 percent of the time) than were women (20 percent of the time). “This is important as violence perpetrated by women is often seen as not serious,” Whitaker and his group stressed.”
Marlton’s piece mostly just repeats the points Hill made.  Men are violent and women aren’t.  Men abuse children and women don’t.  The science demonstrating children’s need for both parents is irrelevant.  The Australian legal system’s refusal to enforce the access rights of non-custodial parents, almost all of whom are fathers, is unimportant.  The ease with which mothers can obtain non-contact orders and the difficulty fathers have in overturning them is never mentioned.
Indeed, in Marlton’s piece there’s essentially nothing of substance.  Since it’s a cartoon, I suppose he figured snark was an acceptable substitute.  But since its purpose is to make a didactic point, you’d think he’d have provided something to back up his claims.  As Steve Martin used to say, “Nah.”
So we learn from Marlton that the only reason a new inquiry is being done is that Senator Pauline Hanson wanted one to be.  Marlton never considers the possibility that the new review will be conducted in part because the last one was so transparently bad.  A casual glance at the write-up of the thing makes that altogether clear, but I suppose cartoonists, even didactic ones, don’t need facts.  Here’s my latest piece on that review that contains links to three previous pieces.
We also learn that any analysis of family courts must, according to all us “Men’s Rights Activists Seething Divorced Resentful Fathers,” conclude that “it is always the women’s fault.”  I suppose I missed that memo.  I guess everyone I’ve associated with in this movement for over ten years did too.  Who knew that the argument that judges who make orders “in the best interests of children” should know the science on the matter was actually just a ruse to attack mothers?  Not me.  For that matter, who knew that the argument for equality between mothers and fathers was actually just a sneaky way of claiming that “it is always women’s fault?”  I’m obviously confused and glad to have Marlton to straighten me out.
I needn’t go on.  I’ll only remark that, at this late date, with so much science so clearly demonstrating the benefits to children of maintaining full, meaningful relationships with both parents, it is beyond outrageous that publications like The Guardian can’t bring themselves to present certain obvious truths.  Yes, it has happened that a father with access to his child has abused that child.  It’s tragic, but true.  What’s also true is that the same thing has happened with mothers.  In all probability, it’s happened more often the latter way than the former, and yet the fact is rarely stated in public discourse.
It is high time that that discourse started putting children’s welfare above whatever interests are served by denigrating fathers.