“Juan Sr… had no knowledge of golf and never saw his son play…The year Juan Sr. died, he finally asked his son to hit a ball in a field next to the Rodriguez house. “‘He wanted to see what a golf shot looked like,’ says Chi Chi. ‘I teed up a driver and I really crushed it. I said, ‘So what do you think, Dad?” He said, I never saw it, son.” That was O.K. I still hit shots for him, and I know he can see them now.'”
Golfer Juan Antonio “Chi-Chi” Rodríguez (pictured) was the first Puerto Rican to be inducted into the World Golf Hall of Fame. According to Wikipedia:

Rodríguez was born into a poor family in Rio Piedras, Puerto Rico. He was one of six siblings. His father used to earn only $18 a week as a laborer and cattle handler. When Rodríguez was only seven years old, he helped the family by earning money as a water carrier on a sugar plantation. One day Juan wandered off into a golf course. When he saw that the caddies were earning more money than him, he decided to become a caddy himself. Rodríguez would take a branch from a guava tree and turn it into a golf club. Using a metal can as a “golf ball”, he would practice what he had seen the “real” golfers do, teaching himself how to play golf. By the time he was nine years old, he was proficient at golf and in 1947 at the age of 12, he scored a remarkable 67… Rodríguez turned professional in 1960. In 1963, at 28, Rodríguez won the Denver Open, which he considers as his favorite win. In total he won eight titles on the PGA Tour between 1963 and 1979.

According to the World Golf Hall of Fame:

Chi Chi Rodriguez”s father died the week after he won his first tournament, the Denver Open.  “He was too sick to attend.  My dad was too poor to play golf.  He was too busy trying to raise us…He died the week after I won my first tournament…I dream of him all the time…He is the reason that I have had this incredible life, doing something I love and seeing the world.  It is because of him that I have never forgotten my roots.’ As a tribute to his father, he started the Chi Chi Rodriguez Youth Foundation. 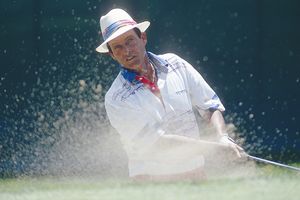 According to Sports Illustrated:

Nearly every day, Juan (Chi Chi) Rodriguez closes his eyes and reaches back through the years. First he sees himself as an underfed, shoeless seven-year-old struggling under the hot Puerto Rican sun to heft an ox-driven plow in a dusty sugarcane field. Then his mind’s eye shifts to night: By candlelight, a barrel-chested man, exhausted from 12 hours of wielding a machete, nibbles at a plate of cornmeal and beans before giving the rest of it to the frailest of his six children, his second-oldest son, Juan… His parents were separated when he was seven, and he and his siblings lived with his father. Though his mother lived nearby, Rodriguez’s most vivid childhood memories involve Juan Sr., who worked on farms and as a dishwasher all his life and never made more than $18 a week. When the elder Rodriguez saw that his namesake was a dreamer with ambition and drive, he took to calling him El Millonario. “My dad gave me so much confidence,” says Rodriguez. “I remember I came home from a fight once, and this kid had beaten me up. My father said, ‘What happened, Don Juan?’ which was the formal way he addressed me. I told him, ‘Dad, this boy beat the hell out of me.’ He said, ‘Well, son, did you back up, or did you fight?’ ‘I fought him, Dad.’ ‘Then,’ he said, ‘you didn’t lose.’ The next time I fought that kid, I beat him.” Juan Sr., who died in 1963 at the age of 73, had no knowledge of golf and never saw his son play. A few of Rodriguez’s stories about his father are told with an almost vaudevillian delivery, like the one about the time his friends ran to tell Juan that his 16-year-old son had just broken the course record at the nearby Berwind Country Club with a 64, and the elder Rodriguez frowned and said, “Well, he better fix it, because I don’t have any money to buy another one.” But most are told with a touching poignancy. The year Juan Sr. died, he finally asked his son to hit a ball in a field next to the Rodriguez house. “He wanted to see what a golf shot looked like,” says Chi Chi. “I teed up a driver and I really crushed it. I said, ‘So what do you think, Dad?’ He said, I never saw it, son.’ That was O.K. I still hit shots for him, and I know he can see them now.”

Chi Chi Rodriguez” tells an interesting story about his father and his childhood in Puerto Rico.

One night at about two o’clock in the morning my father caught a man stealing bananas from our back yard. He went over to the man with his machete, took the bananas, cut the branch in half and said, ‘Here, you can have it.’ And then he said, ‘From now on, if you need anything from the back of our house, come to the front.