Los Angeles, CA–When the Iraq war began nearly five years ago, tens of thousands of parents who serve in the Armed Forces expected hardship and sacrifice. However, they never expected that their children might be taken from them while they were deployed, or that their own government might jail them upon their return.

Military service sometimes costs parents their children. For example, with the long deployments necessitated by the war, a military spouse can move to another state while his or her spouse is deployed, file for divorce, and then be virtually certain to gain custody through the divorce proceedings in the new state. Given service personnel”s limited ability to travel, the high cost of legal representation and travel, and the financial hardships created by child support and spousal support obligations, it is extremely difficult for deployed parents to fight for their parental rights. For many, their participation and meaningful role in their children”s lives ends–often permanently–the day they are deployed. 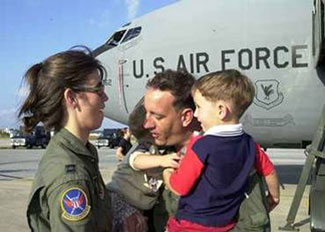 In one highly-publicized case, Gary S., a San Diego-based US Navy SEAL, had his child permanently moved from California to the Middle East against his will while he was deployed in Afghanistan after the September 11 terrorist attacks. The 18-year Navy veteran with an unblemished military record has seen his son only a handful of times since he returned from Afghanistan in April, 2002. Meanwhile, he was nearly bankrupted from child support, spousal support, travel costs, and legal fees. While some military parents face the loss of their children, others face prosecution and jail for child support obligations which their service has rendered them unable to pay. Support orders are based on civilian pay, which is generally higher than active duty pay. When reservists are called up to active duty, they sometimes pay an impossibly high percentage of their income in child support. I’ve discussed this issue in numerous newspaper columns and on the radio, and I often hear from deployed soldiers in Iraq and Afghanistan who tell me heart-wrenching stories of being hammered in divorce proceedings while serving.

The first success on this issue occurred in 2005 under the leadership of Michael Robinson of the California Alliance for Families and Children with the passage of SB 1082. SB 1082 addressed the way parents who serve are often taken advantage of in custody and family law matters while they are deployed, and helped resolve the child support nightmare many mobilized reservists face.

You, the reader, were a part of it–at Robinson’s request, we organized a campaign in support of the bill, and the Senate Judiciary Committee Analysis of SB 1082 made specific note of your calls and letters. The bill was sponsored by Senators Denise Moreno Ducheny (D-San Diego) and Bill Morrow (R-Oceanside).

According to Robinson, Senator Morrow was first inspired to take up this cause after Morrow read my column The Betrayal of the Military Father (Los Angeles Daily News, 5/4/03) about Gary S., the San Diego-based US Navy SEAL. To hear my radio interview with Gary, go to Two Years into Iraq War, Little Has Been Done to Protect the Rights of Military Fathers (3/13/05).

Later in 2005, Robinson and Jim Semerad of Dads of Michigan worked hard to pass Michigan House Bill 5100. According to Semerad:

“[The bill] provides a prevention of a change of custody while a military service member is deployed and prevents the absence from regular parenting time due to military service to affect the weighting of the 12 custody factors in custody determination.”

The bill was sponsored by Representative Rick Jones and Senator Patty Birkholz. To learn more about the Michigan bill, click here.

Robinson has also helped get bills passed in Florida, North Carolina, and Arizona to address this issue.

The federal Servicemembers Civil Relief Act of 2003 (SCRA) (formerly known as the Soldiers’ and Sailors’ Civil Relief Act) protects deployed soldiers against civil legal actions. Perhaps the biggest problem deployed parents face is that judges often do not interpret the SCRA as applying to family law proceedings. Today Robinson and the California Alliance for Families and Children announced that a new federal law will specifically extend the protections of the SCRA to family law proceedings and eliminate default judgments for deployed service personnel. Robinson writes:

“As some of you may know, we have been working on a provision at the federal level to provide child custody protection for deployed military parents. The original amendment was introduced by Rep. Mike Turner, Ohio, in HR 1585. Senator Gregg NH, had also introduced a stand alone bill in the Senate but that bill was killed in committee. The Gregg bill had the same language as the Turner amendment. After HR 1585 went to the Senate the provisions we were seeking went to conference committee and some of the language was lost but the overall intention of the bill was kept.

“For those of you not familiar with HR 1585, this was the National Defense Appropriations Bill that President Bush used the pocket veto on because there was language in the bill that would have allowed the current Iraq Government to be sued for past bad acts by Saddam. I was immediately informed of this even prior to press on the issue, but was assured that Congress was going to fast track a revised bill to fix the problem and that the provision we were seeking for protecting military parents with custody orders was not in jeopardy. “Sure enough, they did in fact fast track a new bill, HR 4986 and the bill was cleared for the White House on 1/22/08 and presented to the President on 1/24/08. I was contacted today by Congressional and White House staff informing me that the President will sign this bill. “The language in HR 4986 for section 584 can be see below. While the language is not as strong as the California statute, where it all started in 2005, and other state statutes we pushed, the language does at least provide protection in all 50 states now. I am still working on other family law issues that effect military parents, and we look forward to having more progress in 2008.” Mike Robinson is one of the most effective advocates in our movement, and I urge all to support him. To donate to the California Alliance for Families and Children, click here. To reach Mike, click on wm_robinson@comcast.net or call him at (916) 749-4033. The bill section reads: “SEC. 584. PROTECTION OF CHILD CUSTODY ARRANGEMENTS FOR PARENTS WHO ARE MEMBERS OF THE ARMED FORCES DEPLOYED IN SUPPORT OF A CONTINGENCY OPERATION. (a) PROTECTION OF SERVICEMEMBERS AGAINST DEFAULT JUDGMENTS.–Section 201(a) of the Servicemembers Civil Relief Act (50 U.S.C. App. 521 (b) HR 4986 CPH is amended by inserting “including any child custody proceeding” after “proceeding.” (b) STAY OF PROCEEDINGS WHEN SERVICEMEMBER HAS NOTICE.–Section 202(a) of the Servicemembers Civil Relief Act (50 U.S.C. App. 522(a)) is amended by inserting “including any child custody proceeding,” after “civil action or proceeding.”