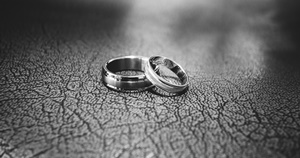 May 26, 2020 by Robert Franklin, JD, Member, National Board of Directors

Falling marriage rates aren’t good for society generally and children in particular.  Non-marital unions are historically far less stable than married ones and the stress of break-up can hit adults hard.  Marriage is positively correlated with better health, greater happiness, lower involvement in crime, higher involvement on the part of men in paid work, greater longevity and economic security.  And of course children who live with married parents are more likely to have lasting relationships with both than are their peers in non-marital households.  In short, marriage is a societal good.

So, why the decline in something that’s good for everyone?  One reason is money (Psychology Today, 9/10/19).  Yes, married couples are, on average, more financially secure than unmarried ones, but women still tend strongly to prefer as marital partners those men who are better educated and out earn them.  Despite decades of women moving into the workplace and corresponding declines in men’s workplace involvement, the age-old desire on the part of women to “marry up” remains.

And what “men have to offer” that “women are willing to accept,” turns out to be earning power.

According to the study, the kind of men that single women likely would marry, if they married… were not only 26 percent more likely to hold a job, and more highly educated, but they also had nearly a 55 percent higher income than what the available men in the U.S. actually make.

So, women are willing to remain unmarried rather than do what men have always been willing to do, i.e. “marry down.”  That of course is far from the optimal situation either for children or for society generally.  That’s even more remarkable given that some 36% of women in their 20s and 30s say that marriage is a very important goal for them to attain.  By contrast, only 29% of men in those age ranges say the same.

A graph of workforce participation rates, using data from the Bureau of Labor Statistics, for men and women aged 16 and over in the U.S. beginning in 1950 and ending in 2015 shows a steady increase in women’s workforce involvement mirrored by a steady decrease in men’s.  In 1950, 88% of men and 33% of women were either working or actively looking for work.  By 2015, women’s involvement had increased to a little over 56% and men’s had declined to about 69%.  Tellingly, during each of those 65 years, the U.S. economy had offered jobs or the promise thereof to between 60% and 66% of Americans over the age of 16.  Stated another way, to a great degree, if one person gained a job, another person lost one.

So it’s no surprise that it’s harder than it used to be for a woman to find a male partner who earns more than she does.  The drive to involve more and more women in paid work inevitably had that result.  What’s remarkable is that the old hypergamy remains, despite marriage being good for women, men, children and society at large.  One would think that women would set aside the desire for a mate who earns more and in many cases they have.  But overall, eons of evolution that taught hominid females to align themselves, if possible, to the highest man in the male dominance hierarchy seems to be winning out over the realities of today’s society and good sense.

Now, the following is speculation on my part, but I suspect it’s sound.

For untold millennia, hominid females mated with whomever they chose.  Monogamy played no part in our ancestors’ effort to survive.  But along came the Agricultural Revolution and property became important.  Previous hominids had been buried with their belongings which were very few.  But agriculture meant that land came to have value.  Land also meant accrued wealth for at least a few and they typically wanted to pass their property on to their offspring.

How could a man be sure that the offspring to whom he left his property were in fact his?  He never could until the advent of DNA testing.  The best men could do was try to connect one woman to one man so that each man could be confident that children born to his wife were fathered by him.  Needless to say, monogamy is far from a foolproof method of doing that, but until recently, it was the best alternative.

Monogamy meant that more males were able to pass on their genes.  Prior to the Agricultural Revolution, just 40% of males passed on their genes, while 80% of females did.  Monogamy meant that, if a woman wanted children, she usually couldn’t expect them to be fathered by males who were highest in the male hierarchy.  So most women had to look elsewhere for mates and lower-ranking males were able to become fathers.  Women adjusted their expectations downward and the gene pool came to be much broader and deeper than at any previous time.

It strikes me that there’s a parallel today with those long-ago times.  It may be that we’re still too early in the process of women taking responsibility for earning for them to have once again adjusted their natural hypergamy to fit the circumstances.  After all, the process of doing so during and after the dawn of agriculture surely required centuries to accomplish, so perhaps something similar may yet take place.