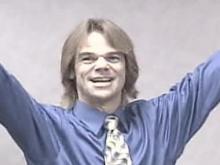 “A man who was pardoned after spending 18 years behind bars for a rape he didn’t commit has been sued for back child support.“Dwayne Allen Dail, 39, was cleared in August of the 1987 rape of a 12-year-old Goldsboro girl. The girl identified him as her attacker and hair found at the scene was similar to his. But DNA evidence found on a fragment of the girl’s nightgown years after the trial proved Dail wasn’t involved in the attack.

“Gov. Mike Easley pardoned Dail two weeks ago, making him eligible to receive $360,000 from the state – $20,000 for each year he spent in prison.“Dail, who now lives in Florida, was served Tuesday with a lawsuit by Lorraine Michaels, the mother of his son, who is seeking back child support. The suit does not specify how much money she wants, as is normal in North Carolina, but asks a ‘reasonable sum for the care and maintenance of the minor child.’ Dail did not provide while he was in prison.“Dail said he was devastated by the suit. He said his son recently moved to Florida to live with him.

“Heekin is in the same law office as Don Strickland, the former Wayne County assistant district attorney who prosecuted Dail for rape.”

The above is from Wrongly Convicted Man Sued for Child Support (10/23/07) from WRAL in North Carolina. A few comments and questions:

1) The man’s son–who is 17 and was born after he went to prison–is now living with him–why should Dail (pictured) owe the ex child support?

2) “Dail did not provide while he was in prison”–what a bastard. While he was behind bars for 18 years for a crime he didn’t commit, he didn’t pay out part of the zero income he earned in prison to pay child support.

3) Lorraine Michaels takes being a greedy, self-centered ex to a new level. Does she really think she deserves a cut of the chicken feed $20,000 a year Dail got for being wrongly imprisoned?

A few other facts about the case:

1) According to another WRAL article:

“During the trial’s closing arguments, [prosecutor] Strickland remarked on Dail’s remarkable confidence in his innocence in the face of such serious charges, Dail said.

“After being sentenced to two life sentences, plus 18 years, Dail continued to maintain his innocence from behind bars. His exoneration justified all that confidence, Dail said at his release…

“In the future, Dail said he may write a book or go to college. He’s also enjoying reconnecting with his 17-year-old son Chris Michaels, who was born after he went to prison.

“‘He’s grown up only seeing his father in prison, and that’s a terrible way for a kid to grow up,’ Dail said.

“‘It’s over, so we can now start spending more time together and getting to know each other a lot better,’ Michaels said.”