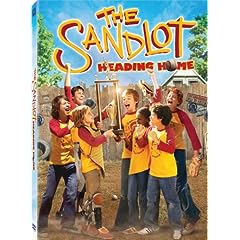 Recently my daughter and I were watching her second favorite movie, The Sandlot 3. (Her favorite movie is The Sandlot 1). The movie is the story of arrogant baseball star Tommy “Santa” Santorelli who (warning: plot spoiler ahead) travels back in time to 1976 and relives his boyhood days on the sandlot baseball team. This time he chooses friendship over individual accomplishments, and ends up turning his life around, becoming a beloved baseball star instead of a hated one.

When Santorelli goes back to his childhood he is reunited with his mother, who died when he was about 12. The boy’s bond with his mom is touching and sad, no question. However….Santorelli’s father is not mentioned.

I don’t mean that he’s not there–we’re used to that. Normally when they want to depict an absent father they’ll depict him as dead or, more commonly, as having run off. (Just once I’d like to see a kid in a mainstream movie casually say “Oh, my dad’s not around–mom divorced him and used family court machinations to drive him out of my life when I was younger.”) But here, unless my daughter, my wife and I all missed something, Santorelli’s father is not referred to at all. A child not having a father has become so routine that the screenwriters don’t even feel obligated to throw in a one sentence reference to dad and why he’s not here.

This is an increasingly annoying feature of many modern movies–“John Tucker Must Die” and Toy Story” are a couple of other examples. It seems particularly offensive here because, dammit, this is a baseball movie. Dads, boys and baseball go together. So in honor of the father-son-baseball bond which The Sandlot 3 has besmirched, I’ve put together some details about the loving bonds many current and former major league baseball players shared with their dads. Some examples include:

Former New York Mets relief pitcher John Franco, one of the better closers in baseball during the 1980s and 1990s, always wore an orange NYC sanitation T-shirt under his baseball uniform, in honor of his father, a New York City sanitation worker.

Former New York Yankee right fielder Paul O’Neill published the book Me and My Dad: A Baseball Memoir after his playing career ended. O’Neill’s father, Charles “Chick” O’Neill, was a paratrooper in World War II and pitched in the minor leagues. He died after Game 3 of the 1999 World Series. Paul O’Neill went to his father’s funeral, then played in Game 4, helping the Yankees complete their sweep of the Atlanta Braves.

Current Houston Astros star first baseman Lance Berkman recently told a reporter, “My dad is my hero…I think so much of him. He’s just got tremendous moral values, and he’s just a wonderful person and somebody who’s very comforting to be around…He’s someone I’ve learned through by example more than anything else, particularly with his honesty…He’s not a man of many words. He’s not very charming. He’s not necessarily a guy that will walk up and take the floor and talk a bunch. But the way he lives is an example to a lot of people. He’s a true gentleman. He’s got a lot of people that look up to him and the way he carries himself. A lot of times actions speak louder than words, and he’s a guy that certainly lives that out.”