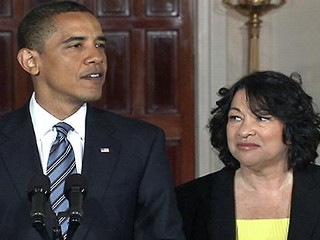 According to the New York Times, some of Obama’s new Supreme Court nominee Sonia Sotomayor’s “most notable decisions came in child custody cases.”

I’d be interested to learn more about how she ruled in these cases and whether she in general worked to protect the bonds children share with both of their parents after a divorce or separation.

I did see the details of one case, Croll v. Croll. In that case she appeared to rule correctly, siding with a father after his ex-wife had violated a court order by moving his child several thousand miles away.

According to the New York Times:

Some of her Judge Sotomayor’s most notable decisions have come in child custody and complex business cases. One case concerned a child of divorced parents who lived in Hong Kong. The mother had sole custody of the child and the father had “reasonable access.”

The mother took the child to New York, and the father filed a petition for return of the child to Hong Kong. A custody order said the child could not be removed from Hong Kong without the consent of the father or the Hong Kong court, and the case centered on whether this clause confers “rights of custody” under the Hague Convention on International Child Abduction. If it did, it would require the child’s return to Hong Kong.

On appeal, the court ruled the removal was not wrong because the father did not possess rights of custody. In her dissenting opinion, Judge Sotomayor argued that a broader interpretation of “custody” was more in line with the “object and purpose” of the Convention, and that this was how foreign courts had considered the issue. The question in this case, Croll v. Croll, is before the Supreme Court in Abbott v. Abbott.

If anybody knows more about some of her other decisions in family law/child custody cases, please let me know by clicking here.