It’s more than just family courts and laws that keep fathers and children apart.  Other somewhat unexpected institutions do too (The Conversation, 6/14/19).  Professor Jessica Troilo of West Virginia University tags schools as one of the those that make it hard for dads and kids to maintain meaningful relationships following divorce.

Troilo makes a funny, sad and trenchant observation, one that had never occurred to me.

By the time Father’s Day takes place, the school year is usually over.

She rightly calls that an “apt metaphor” for the way schools often treat fathers.

Troilo has conducted a bit of research.  She only interviewed 20 fathers, so her findings are scarcely definitive, but listening to those fathers suggests much.

“My son’s school never calls me,” one father told me in a statement that could be emblematic of the plight of noncustodial fathers.

Teachers and school administrators do what’s so common: they assume that Mom is the primary parent and the default for “family communications” regarding the child.  Often enough, that remains true even when Dad has a court order requiring him to be informed.

[T]hey’re often simply not seen as part of what takes place at school. These fathers are often viewed as irresponsible and uninvolved.

I learned this by talking to 20 fathers as part of my research. I found that divorced fathers, especially those who don’t share a residence with their children over 50% of the time, can find it challenging to remain involved in their children’s academic development. Several fathers told me about how often teachers and administrators at their children’s schools fail to recognize them. 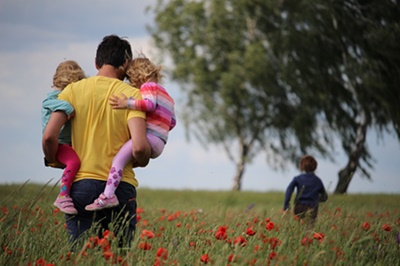 Those attitudes of course simply reflect the current zeitgeist that’s revealed elsewhere by, for example, family courts, family laws, adoption laws, child protective services, child support laws and pop culture.  So it’s not as if the schools Troilo refers to are going out on a limb.  On the contrary, they’re solidly in the mainstream of institutional behavior toward dads.

Troilo moves on to point out some of the problems with marginalizing fathers in the lives of their children.

When fathers who don’t live with their children are involved with their kids’ school, the kids are less likely to repeat a grade or be suspended. They are also more likely to have higher grades.

That’s quite the irony, isn’t it?  We might think that schools, of all places, would bend heaven and earth to enhance children’s academic environment.  Doing so would in turn improve kids’ performance and satisfaction with their experiences in school.  That would likely encourage a healthy attitude toward learning generally.  Indeed, Dr. Anna Machin’s book The Life of Dad cites a 40-year study of 17,000 kids in the U.K. that finds that fathers are primarily responsible for their children’s mindset regarding academics.

But, if Troilo’s research reflects the reality faced by fathers in dealing with their children’s schools, then they’re doing the very opposite of what would be fair to fathers and good for their kids.

In cases in which fathers are battling a gatekeeping ex, schools only make matters worse.  In effect, they abet that wrongful behavior.

The father who misses his daughter’s school play or soccer game has become a commonplace in the discourse about fathers and kids.  Inevitably, those portrayals present dads in a negative light, i.e. the father cares so little about his children that he can’t be bothered to show up.

Troilo’s work suggests there’s a lot more to the story than just callous and uncaring fathers.  There’s a whole host of opponents to fathers’ maintaining real relationships with their kids, and schools look to be one of them.

Next time, I’ll say much the same about the medical profession.