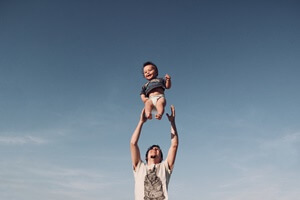 Don’t denigrate play. It’s serious child-rearing work. And, it turns out that dads and moms play with their children differently (on average–obviously, there are many individual variations).

According to recent research from Cambridge University reported in The Guardian, dads “tend to engage in more physical play like tickling, chasing, and piggy-back rides.” Even with the youngest children, fathers enjoy more “boisterous rough-and-tumble play.”

This won’t be news to most parents, and certainly not to anyone who has read Dr. Anna Manchin’s terrific book, The Life of Dad. I once read  an article by an expert on child development who frequently asked audiences of mothers and fathers for a show of hands of those who would play with their older infants by raising them up and down in their arms. Almost every hand in the room went up. Then this expert asked, and how many of the parents toss the infant up, letting go and then catching them. Then, this expert said, almost all of the mothers’ hands went down.

All kinds of play, including rough-and-tumble play have specific benefits for children.  “Children who benefited from ‘high-quality’ playtime with their fathers were, according to the study, less likely to display hyperactivity, emotional or behavioural difficulties. They also appeared to be able to control their aggression, and were less likely to lash out at other children during disagreements at school.”

The next time you’re playing hard with your toddler or child, or the next time you see a father doing this, remember: it’s not just play; it’s serious work. (That doesn’t mean that it’s not a lot of fun, too, though!)