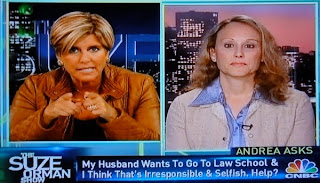 Psychologist/commentator Dr. Helen says TV financial guru Suze Orman is unfair to husbands. She explains that a recent show featured Andrea, who went on the show to criticize her husband Joe. She writes:

Joe’s crime? He dared to want to go back to law school in his forties and his wife made more money than him. It seems that wife Andrea makes $120,000 per year and poor Joe only makes $90,000. Joe has little in retirement and was in the military, then went to film school and now, (gasp!) wants to go to law school. Okay, so what? If it was a woman, she would be told to fulfill her dreams…[yet Joe is] a pathetic loser who is going to lose his marriage if he can’t step back in line.

Orman and the wife ooze their disgust on national television while Orman gives Joe a lecture on what a loser he is…she sounded like Keith Olberman’s “Worst Person In The World” segment. He was not there to defend himself, nor have I ever seen a man defend himself on Orman’s show. Do they not dare or are they not allowed?

Note the caption on the photo of the show above–Andrea apparently asserting “My husband wants to go to law school & I think that’s irresponsible & selfish.”