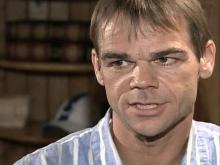 Background: Dwayne Allen Dail, who was pardoned after spending 18 years behind bars for a rape he didn’t commit, was recently sued for back child support. Dail, 39, was cleared in August of the 1987 rape of a 12-year-old Goldsboro girl. The girl identified him as her attacker and hair found at the scene was similar to his. But DNA evidence found on a fragment of the girl’s nightgown years after the trial proved Dail wasn’t involved in the attack.

Dail will receive a chump change $360,000 from the state – $20,000 for each year he spent in prison. Upon his release he was served with a lawsuit by ex-girlfriend Lorraine Michaels, the mother of his son, who is seeking back child support. Dail said he was devastated by the suit, and that his son had recently moved to Florida to live with him. To learn more about this case, see my blog post This Takes Being a Greedy Ex to a Whole New Level.

Thankfully the child support lawsuit against Dail has now been dropped:

Goldsboro — A child support lawsuit for back child support against a Wayne County man who spent 18 years in prison for a crime he did not commit has been dropped.

Dwayne Dail said the suit, filed in November by his former girlfriend Lorraine Michaels for back child support while he was in prison, was dismissed Friday.

But he said he could not comment on the deal but was happy the matter was resolved.

“I am very happy and relieved to have this black cloud removed from me and my son’s bonding process,” Dail said. “And I hope that there can begin some healing between me and Lori, too. This has been extremely difficult for everyone involved.”

Michaels sued for a “reasonable sum” of a $360,000 compensatory payment Dail is due from the state for his wrongful imprisonment.

Earlier this month, a judge ruled Michaels should receive only a portion, if any, of the payment

Dail spent 18 years in prison for the rape of a 12-year-old girl. He was exonerated by DNA evidence in August.

He is expected to receive that by the end of January and said he plans to use it to buy a house for him and his son and enroll them both in college. Dail said he wants to pursue a career in criminal justice to help other innocent people in prison.

“I want to have that feeling of having helped someone who is desperately in need of help,” he said.