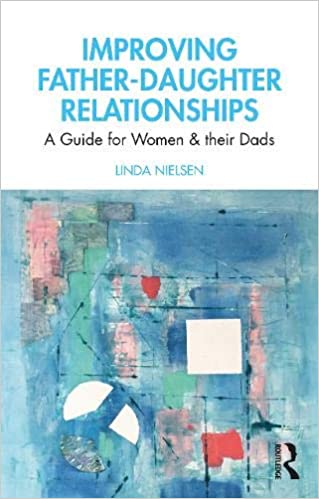 April 10, 2020 by Robert Franklin, JD, Member, National Board of Directors

Dr. Linda Nielsen has written an important and necessary book.  Entitled Improving Father/Daughter Relationships: A Guide for Women and Their Dads, it’s based on Nielsen’s many years of research into father-daughter dynamics as well as the work of other established social scientists.  It’s scientifically based, but written for lay people.  It’s a book for any father or daughter who’s concerned about their relationship with the other.  It’s for any father who’s expecting a daughter or already has one of any age.  It’s for any daughter in her mid-late teens or older.  And, although the title doesn’t mention it, it’s for mothers with daughters.

Improving Father/Daughter Bonds is scheduled for release in June.  The book can be purchased here.  And here it is on Dr. Nielsen’s website.

As a professor and researcher in adolescent psychology, Nielsen asks fathers and daughters who believe they can improve their relationship with each other to familiarize themselves with the applicable research first.  That’s because there’s a welter of mis/disinformation about fathers which it’s essentially impossible to avoid.

Fathers and daughters start out with a disadvantage in part because our society idealizes mothers in ways that undermine the father-daughter bond. Media, commercials, children’s storybooks, TV sitcoms and films generally portray mothers in more favorable ways. Compared to dads, the moms are more unselfish, understanding, sympathetic, insightful, trustworthy, and self-sacrificing. Even Father’s Day cards often make dad look like a moron compared to mom. Indeed, you will have a hard time finding Mother’s Day cards that make women look as incompetent and insensitive as fathers. American children and their parents are surrounded by messages that idealize mothers and that sideline, denigrate, or mock fathers.

Anyone with an interest in fathers and fatherhood knows the genre.  Needless to say, kids, including daughters, absorb the message often to the detriment of their relationship with their father.  So do fathers who can all too readily conclude that they’re incompetent at parenting and poorly designed for the job.

But the research that Nielsen asks readers to learn says otherwise.  In fact, fathers are every bit as competent at parenting and necessary to kids as are mothers.  As readers of this blog well know, humans are a bi-parental species; our kids need both parents and both parents provide parenting inputs that are special (if not unique) to them.  Nielsen wants us to look past the news media and pop culture to what science tells us about fathers and their kids.  She can’t shout that too loudly.  It’s a message we all need to hear and internalize.

Fathers have a profound, lifelong impact on their daughters’ well-being—their academic and career success, income and job security, romantic relationships and marriage, drug and alcohol use, and her physical and mental health. Though we tend to overlook this reality, daughters also have a big impact on their fathers. When fathers are not getting along well with their daughters, especially if they are growing apart, fathers are more physically stressed, anxious, unhappy, and depressed. In extreme cases, when they seem to be losing all connection to their daughters, fathers are more likely to become suicidal and more likely to abuse drugs and alcohol.

In the book, one of her most effective methods of teaching research findings to readers is via “What do you think?” quizzes that ask readers’ beliefs about a wide range of topics.  In taking the quizzes, readers focus on what they believe about fathers and their impact on and importance to their children.  All too often, those beliefs are products of popular culture or simple bias.  As one example, Nielsen asks readers to agree or disagree with the following assertions:

The first five are correct, the next 10 incorrect.  But how many lay people would answer them all correctly?  My guess is very few.  And in that way, Nielsen challenges their pre-conceived notions and provides a window on the deep and broad science on parenting.

Because hers is a book for lay people and because she wants fathers and daughters to be closer than many of them are, Nielsen offers readers a “how-to” approach to healing damaged relationships.  It’s a four-step process.  Step One is to learn the research on the topic at issue.  So, if a father’s adult daughter wants to have a baby out of wedlock and Dad is opposed, it can be helpful for them both to know that out-of-wedlock childbearing is a very unstable arrangement that often results in the child growing up without a father.

Step Two is “Don’t Make Assumptions.”  So, if a daughter has boyfriend issues, money problems, school issues, etc., she may assume that her father will react a certain way if she brings them up with him.  She may be right about her assumptions, but she may be wrong.

This is why a daughter needs to invest time, lots of time, finding out: Who is this man? What does he feel and believe—and why? Where do his beliefs and feelings come from? His parents? His religion? His experiences as an adult? Something he read? Things he has heard about other people’s experiences?

Step Three is “Identify and Share Your Fears.”  If there’s an issue between a father and daughter, it’s likely that each harbors concerns about how the other will react if the issue is confronted.  Those fears need to be faced and dealt with.

Finally, fathers and daughters need to “Propose a Plan” to resolve the issue.  Doing so involves three steps.

First, only ask for one change. Do not reel off a list of all the things you want the other person to change. Just focus on one or maybe two changes that you think would help resolve the situation.

Second, tell one another how you feel about the troublesome situation as it now stands. Sharing your feelings helps the other person understand why it is important to settle things between you. For instance, if the current situation makes you feel unloved, say so. Or if it makes you feel unappreciated or taken for granted, they say it. Sharing feelings also helps you perceive each other as vulnerable, sensitive people. Again, you want to be specific when you talk about your feelings. I feel “bad” or I feel “sad” is not very specific. Try these kinds of words instead to describe your feelings: unloved, unlovable, unappreciated, unwanted, abandoned, and rejected. Whatever your feeling is, own up to it and state it.

The third step is the hardest. What are you going to do differently to contribute to a solution? You need to offer at least one change in exchange for the change that you are asking the other person to make. Both people have to contribute to the solution. It can’t be all give on one side and all take on the other.

Nielsen’s book is rich with intelligence and even wisdom.  In this era of family breakdown and disinformation about fathers, it provides vital information that counteracts widespread and inaccurate beliefs and helps create and sustain healthy father-daughter relationships.

I’ll have more to say about Improving Father/Daughter Bonds when it comes out in June.